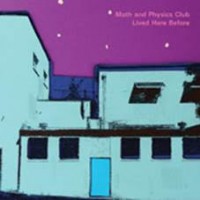 On this 4th album the band stretch confidently into new territory while featuring all the carefully constructed pop handicraft we've come to expect from these Pacific Northwest lads. Working from a makeshift studio in the wilds of Snohomish, Washington, with fabled grunge producer Chris Hanzsek , the band recorded 11 songs over 4 days. Longtime fans will still recognise the band's upbeat sound set against often bittersweet storytelling, but there's also a darker, more world/weary undercurrent. The lead track hreadbare' sets the tone with its Shins/esque beat and close/up intima/cy, followed by a powerful pushme/pull/you between the verses and choruses, sweet and sad. he Pull of the Tides' evokes bands like The Ocean Blue and The Softies and sets up one of the album's more subtle tracks, ike Cinnamon,' which flips the dynamic between music and lyrics with its brooding backdrop. Side two's opener, ear Madeline,' is vintage Math and Physics Club with intertwining guitars and soft brushes beautifully set against one of the band's more poignant vignettes. The mood shifts to agitation with ake a Number' which paints a more insidious type of darkness, fueled by its duelling guitar riffs and percussive flourishes. The album's title is also pulled from one of its lyrics. The album closes in characteristic economy with rive to You' which features an arrangement stripped down to simply two guitars and a lilting melody, accented with subtle organ. It's a fitting end note that reaches back to the band's earlier days and leaves us feeling a bit more sweet than bitter, which seems just about right. Math and Physics Club set the match of literate, vivid lyrics and irrepressible melody to their faded/picturebook boy& girl har/monies".