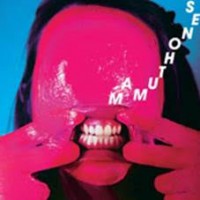 Mamuthones may have originally taken their name from the death/masks used in rituals in their na/tive Sardinia, and initially emerged from the Italian occult psychedelic movement alongside the likes of Father Murphy, Mai Mai Mai and their labelmates Lay Llamas. Yet now the band find themselves undergoing a metamorphosis from mystical and ceremonial realms into a direct connection with the everyday, the personal and the political. This vibrant reinvention also sees Mamuthones transcending their roots in Italian prog and soundtrack work and shifting their modus operandi firmly in the direction of a distinctly New York/based headspace / a realm of mirrorballs and black/clad basements both. As the band's Alessio Gastaldello tells it, this is a groove/based. eclectic style that finds its metier in the realm of two albums which are paid direct homage in the record's very title / the bleak and kinetic ear Of Music' by Talking Heads and the iconoclastic, heat/haze repetition of Miles Davis' n The Corner'. This is principally an aural landscape whereby the eclectic mischief of ZE Records, the sonic brinksmanship of ago Mago' era Can and the post/punk songwriting flair of LCD Soundystem can happily form communion in a post/2AM reverie. "We are a kind of Titanic orchestra play/ing and dancing while the ship goes down. The party must go on"

Evil Blizzard
Everybody Come To Church

Radar Men From The Moon
The Bestial Light