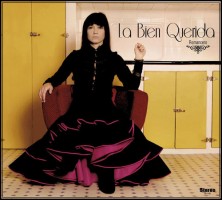 When J (LOS PLANETAS) urged his friend Ana Fernández-Villaverde, a painter up to then, to write her own songs, little did he imagine what he was starting. It was 2005 and she had bought her first guitar one year before. Suddenly LA BIEN QUERIDA revealed herself as one of the brightest musicians to appear in recent Spanish indie-pop. Her demo, recorded in 2007 with the help of Horacio Nistal, made everyone who listened to it, and there were a lot of people who listened to it, fall in love with it. Her myspace page, with nearly 125,000 listens, is one of the most visited pages for a new artist. Her songs were simple things (with her on guitar and some minimal arrangements) but with a disarming beauty, fabulous poems about falling in love and out of love that follow the line of LOS PLANETAS without noise, the emotional intensity of SR CHINARRO without irony, the sweetness of LA BUENA VIDA or CLAUDINE LONGUET without the languor, the romanticism of FAMILY without the techno-pop costume. It was chosen best demo of the year by Mondo Sonoro and highlighted by Rockdelux. One of the most excited people was Antonio Luque (SR CHINARRO), who lent a hand as the band in a series of concerts in Madrid at the beginning of 2008. The most popular girl ended up signing with Elefant, who finally have the privilege of releasing her first album.TRACKLIST: 01. Ya No 02. Corpus Christi 03. De Momento Abril 04. ADN 05. 9.6 06. Cuando Lo Intentas 07. El Zoo Absoluto 08. 7 Medidas De Seguridad 09. Bendita 10. Santa Fe 11. Los Estados Generales 12. Golpe De Estado