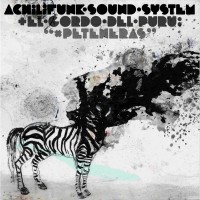 The electronic rumba combo commanded by DJ Txarly Brown finalizes the release of his third album. -X Peteneras- is a new twist in the spanish flamenco rumba experimentation of the Achilifunk saga that began with the album compilation book -Achilifunk- *Lovemonk, 2007( in which the influence of soul and funk was documented in the Catalan rumba from the 60s and 70s. Then came the remix disc -Más Achilifunk- *Lovemonk, 2009( and the creation of the Achilifunk Band, with the collaboration of the OJO del Taller de Músics, and together they gave birth to the album -Gitano Real- -*Lovemonk, 2011( and a presentation tour that brought Txarly-s fusion theories to the stage. Later the big band was reduced to the quartet Achilifunk Sound System, with which it has already edited -Robot Caló- *PPF, 2015( and -Disco Jondo- *PPF, 2016(. Along the way Txarly had time to edit the graphic bible of the spanish Rumba legacy -Achilibook- *Milenio, 2013( and now the time has come to make a new turn in his evolutionary theories. For his new album he has recruited the young MC El Gordo del Puro *from the mining town of Súria, Barcelona(, a kind of Albert Pla rapper tracker follower of the Achilifunk saga, which has provided a new discourse to the combo. A new discourse, needless to say, politically incorrect, away from general complacency and willing to awaken the critical thinking of the listeners.If in the two previous albums the repertoire came from versions of classics of rumba and funk and we found a very strong cast of collaborators that go from Peret to Chacho passing through Ramonet, Chipén, Ximenis, Lady Gipsy, Ro, Paco Mantecao, Garbanzo, El Coleta or the Japanese vocal trio Zukunasisters, in -X Peteneras- there is no version and the only artist in collaboration is the unrivaled presence of El Gordo del Puro. A new work that includes 10 songs, all original, that have been built on distorted samplers of old rumba and flamenco loops or, directly, they have improvised in the studio based on totally crazy ideas. In spite of everything, 100% of the material has been sewn and cooked by the producers Miguelito Superstar *Fundación Tony Manero( and Jack Chakataga under the tutelage of Txarly Brown. The result is a strange disc, unequal, lame, mutant, alien, disproportionate, hurtful, absurd and bastard. Yes, especially bastard, taking into account that El Gordo del Puro has invented a repertoire of lyrics that speak of current events from an insulting prism, without complexes or conditioning. What he calls rap junkie rumbero. If it was already difficult to rape on electronic rumba, pretending that you do smoked crack still complicates the thing. Inspired by the rumbero rap of Yumitus or Lain, regardless of the gypsy trap, the wild way was undoubtedly the yonkorap.