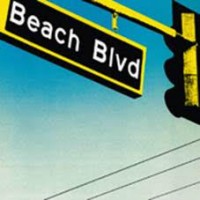 Named after California State Route 39 *aka Beach Blvd.(, which runs north/south through Orange County, this 1979 compilation originally released on Posh Boy is a seminal piece of Orange County punk rock. Featuring tracks from The Simpletones, The Crowd, and Rik L Rik *basically a later incarnation of Negative Trend with Rik on vocals(, Beach Blvd. set the stage for the Southern California hardcore explosion of the 1980s and showed tons of kids from outside the big city, growing up bored and lonely in the suburbs, that they had a voice and an outlet in this nascent rock form. One of the all/time essential pieces of punk rock from the greater LA area, and although the names on the track list might not be as instantly recognizable as Black Flag, or X, or The Germs, make no mistake, Beach Blvd. influenced a generation of punk kids in a massive way. Finally back in print on LP thanks to Radiation Reissues.Track list> Side A> A1 Simpletones / Kirsty Q A2 Simpletones / I Have A Date A3 Simpletones / Tiger Beat Twist A4 Rik L Rik / Black And Red A5 Rik L Rik / Meat House A6 The Crowd / Suzy Is A Surf Rocker A7 The Crowd / Living In Madrid A8 The Crowd / Trix Are For Kids Side B> B1 The Crowd / Modern Machine B2 The Crowd / New Crew B3 Rik L Rik / I Got Power B4 Rik L Rik / Mercenaries B5 Rik L Rik / Atomic Lawn B6 Simpletones / Don[t Bother Me B7 Simpletones - California