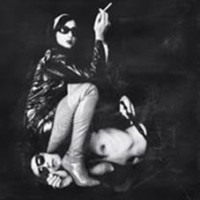 FROM NAPLES, ITALY COMES THAT EAR/BLEEDING MINIMALISTIC BLASPHEMIC GUITAR WALL BLUES ROCKABILLY NOISE TRASH ROCK'N'ROLL TORNADO!! MADE BY ONLY 2 PERSONS The Devils formed in The Deep South Of Italy Naples in 2015, Recorded 1st and 2nd Full Length with Jim Diamond *the Dirtbombs, White Stripes etc( hooked up with Voodoo Rhythm Records and Toured all over Europe *about 200 shows a Year!!(, they Listen to Magic Sam and Howling Wolf in the Band Car and on Stage the have the Drive of the early Venom !!! Gianni Pregadio plays the Guitar and Sings and Erica Toraldo hits the Drums and Screams in the Microphone, This is a Huge Wall of Guitar Fuzz and Noise and Vocals as Minimalist and Primitive as it gets, this is No Bob Dylan poetry that-s pure Evil and Lots of Fun !! Chainsaw Massacre Hysteric Ear bleeding Vocals and the Drummer probably Eats Speed and Power Food for Breakfast, they are Dressed up as Preacher and Nun and Destroy every Stage that they can play on, they Are Hot and Wild Very Loud and Very Very Sexy !!!!! On the Newest Release IRON BUTT, they are more brutal than ever, this is DOOM mixed up with GARAGE PUNK and HARDCORE ROCK-N-ROLL the longest song is 3minutes the rest of the song are loaded with so much energy that they blast off after 1 minute .. For those recordings they went to Montebelluna-s Outside Inside Studio with to get a special warm Analog sound,the Song RED GRAVE *video clip( has a New York NO/Wave killer mixed up with the Desert Sound of the Joshua trees, PRAY YOU PARROTS is just plane a fist in your face and you wanna here it again and again because it feels so good, the only cover version is THE PEOPLE SUITE written by the Deviants in 1969