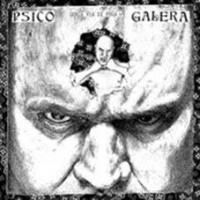 The seemingly lone supernova of extreme hardcore punk in early and mid 80s Italy feels like a dis/tant, but crystal clear memory. Italy seemed to have found itself entering an explosive world of new musical freedom and continued countercultural activism all the way from poetry to paisan, with re/newed license to be inept and irrational as a matter of purpose and intent, now with all expectations of beauty out the window. Psico Galera are no Italian/by/numbers band, though.. Channeling the attempts that bands like Bitosha and early Kuro made at aping Motorhead into their own vain image, Psico galera add a twist, using the frenetic speed of the Italian language almost as an instrument, not entirely unlike the uninten/tionally Italian futurist tempos of Wretched. @Senza Via Di Fuga,@ is their debut EP. Featuring members of Archaic, Career Suicide, Fucked Up and Game.