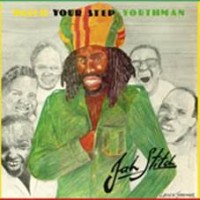 After a disjointed childhood that saw him raised largely by two aunts between eastern Kingston and rural St Mary, Melbourne James became the toaster Jah Stitch after running away from home and linking with the Spanglers street gang, whose Princess Street headquarters was also the base of the popular Tipper Tone sound system. After cutting his teeth on Tipper Tone alongside Big Youth and Dr Alimantado, friction over financial recompense saw him forming the rival Black Harmony set in 1975, but because the new sound was based in a district that was on the other side of the political divide, Stitch was shot in the face at point/blank range, his miraculous survival immortalised in the Bunny Lee/produced hit, o Dread Can Dead,' which became the title track of Stitch's debut album. Watch Your Step Youthman was the follow/up set released by Bunny in 1977, and again places Jah Stitch's understated Rasta/oriented chanting over a set of rock/hard Aggrovators rhythms, recorded with Johnny Clarke, John Holt, Derrick Morgan and others.