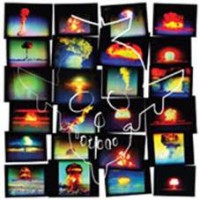 Back in stock! Peter Holmström named his solo project Pete International Airport after a song by his other band The Dandy Warhols. Safer With The Wolves.' is a meticulously crafted psyche rock journey into the dark heart of electronica on which Peter has enlisted the help of numerous like/minded musical allies. One of which, if you're to believe a certain infamous rock documentary called Dig! is an unexpected union< Anton Newcombe is releas/ing afer With The Wolves.' on his own record label A Recordings. The albums' 11 tracks feature a variety of guest singers and collaborators including Robert Levon Been *Black Rebel Motorcycle Club(, Alex Maas *Black Angels(, Lisa Elle *Dark Horses(, Jason Sebastian Russo *Hopewell, Mercury Rev(, Jsun Atoms *The Upside Down, Daydream Machine(, Emil Nikolaisen *Sereena/Maneesh( and Jeremy Sherrer *The Dandy Warhols, Modest Mouse, The Shins(.

Lambert, Adam
Velvet - Side A