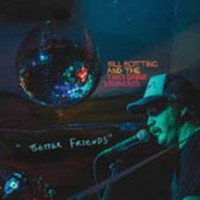 Following Allo Darlin's triumphant farewell back in Dec 2016, their ever/buoyant bass play/er Bill Botting is releasing his debut solo album. He gathered a supergroup of siblings and indie legends including Allo Darlin' bandmate Paul Rains, Jonny Helm from The Wave Pictures, Tom Wade from Owl ^ Mouse, Laura K from Tigercats, Darren Hay/man and Hannah Botting from home and christened them the Two Drink Minimums. Better Friends is simply described as indie mixed with country, or country mixed with indie. You can hear the Go/Between-s in there, some solo McCartney, perhaps an An/tipodean Kinks and even some classic Hall and Oates.. The cover of Graceland came from hearing Willie Nelson's version while waiting for the rest of the band to arrive for the first rehearsal. Having thought it was uncoverable, Bill proceeded to cover it with the gang. And he still modestly maintains that The Two Drink Minimums' version is the second best of the three.

May, Dent
Across The Multiverse