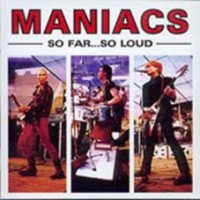 The Maniacs were one of 1977's original first flush Punk Rock bands in London signing to United Artist Records and releasing the single Chelsea 7 b&w Ain't No Legend recorded at Pathway studios and produced by early Sex Pistols producer Dave Goodman. The Maniacs played all the renowned Punk Rock venues in London, contributing two tracks to the Live at the Vortex album and appearing live at the Mont de Marsan Punk Rock Festival with the Clash the Damned and the Police in'77. The band were to crash and burn in true Punk Rock style at the beginning of 1978. Band members Rod Latter went on to join the Adverts. Robert Crash went on to working in songwriting ^ production with the Eurythmics and Robert Plant. Alan Lee Shaw went on to form the Physicals and worked with Brian James, Paul Cook, Glen Matlock, Kirsty MacColl, Dee Dee Ramone and finally ending up as a member of the Damned.So Far So Loud is a 40th anniversary compilation of the most of the songs recorded in the brief history of the band including the UA single Chelsea 7 b&w Ain't No Legend, the Live at the Vortex tracks plus studio and rehearsal demos. The album also comes with a fine collector's collage of photos and memorabilia on both sides of the inner sleeve from the era.

Damn Times, The
Don't Like People/i Got This One