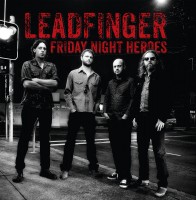 The songs for Friday Night Heroes were recorded in mid to late 2015 (after 18 months of songwriting and development) at Sydney's Linear Recording with Wade Keighran (Wolf & Cub, Steve Smyth Band) behind the controls. Half way through the recording though, Leadfinger's leader and songwriter Stewart Cunningham was faced with the sudden death of his mother but continued on with the project, partly as a tribute to the woman who gave him his love of music and words and partly as a way of making some sense from the loss.Guests on the album include singer/songwriter Leah Flanagan on backing vocals and renowned Sydney bassist Andy Newman (The Visitors/Decline of the Reptiles et al) makes a cameo on the keys but it is Doug Hazell's Saxophone bursts on Heart on My Sleeve, the haunting Raining in the Dark and closing track My Own Road that have the most impact, bringing a Springsteen like urgency to the album. The title song however is the album's epic heart, inspired in part by Cunningham's love of playing live and the unpredictability of venues, turnouts and reactions . the song showcases the band's intricate guitar interplay and ability to weave a rock'n'roll story.

Black Randy & Metrosquad
I Slept In An Arcade