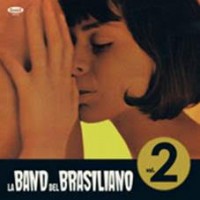 The Tuscany big band La Band Del Brasiliano is back for their second studio album, Vol. 2, following Vol. 1 released in 2013. The band draw on the retro tradition of Italian easy listening, funk, and sexy comedy, presenting a set rich in sung songs and with a large number of original tracks compared to Vol. 1, as well as with the contribution of bows, percussions, and a complete brass section. In Vol. 2, you can locate three lines> One that develops the soul beat of the band, shamelessly retro in the musical and textual approach> mostly captured in straightforward songs, like @Impossibile@, @Hey Ragazzo@, and @Preparati Bambina@, are a blend of rock n- roll and raw soul, with the two voices of Serena Altavilla *Solki, Mariposa, Calibro 35( and Davide Arnetoli. The other is a romantic soul, tied to passion and jealousy, that is expressed best in the almost noir atmosphere of the triptych @Un-ora In Più@, @Il Tema Della Gelosia@, and @Anna / La Domenica@. But even in @La Verità@ the story of emancipation and freedom is present, with musical veins from spy story. The third line is funk and eroticism, as in @Ti Voglio@, the favorite Italian disco song of the band which anticipates the release of the album as a whole // the sulfur @Eclisse Twist@ from Antonioni-s masterpiece, @Giovani Di Nulla@ and @92° Minuto@, conceived as imaginary characters of TV programs.