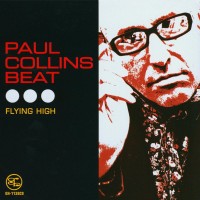 Back to stock!! @Flying High,@ Paul Collins- 11th album since The Beat, marks an end to a nearly 12/year musical quest and the start of a creative period that will generate several more releases, including more full/length studio albums, a live album and a surprise that is sure to thrill fans of Collins- entire body of work. The new 12/track album was recorded in Madrid over the course of four days. @Flying High@ is a return to the basics for Collins. The album successfully fuses his undeniable song writing talents with his unparalleled musicianship. In fact, the bulk of the album was recorded live, with many songs largely completed in the first take. The album-s 12 songs showcase Paul Collins band-s undeniable skill andmusical versatility. @Flying High@ is a mix of up/tempo guitar driven Collins instant classics such as -More Than Yesterday- and -Helen- and more introspective darker tracks such as -Bobby,- -I-m On Fire- and -Flying High.- One of the many highlights is a track entitled, -Rock -n Roll Shoes,- which Paul describes as @the daughter@ of The Beat-s classic anthem -Rock -n Roll Girl-.

Collins, Paul - Beat
The Kids Are The Same