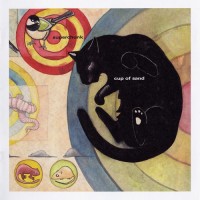 I-ll be honest> this compilation came out 14 years ago, and I still don-t recognize the titles of 60% of these songs, despite drumming on all but one of them. You think Alan Alda remembers every M]A]S]H episode_ I-m sure he can give a scene/by/scene breakdown of the show-s now/legendary final installment *@Goodbye, Farewell and Amen@( and yet have no memory whatsoever of the episode where they help an injured cow give birth *@The Birthday Girls@(. It doesn-t mean that one episode is better than the other. ok. this argument doesn-t hold water, and I can see that now. The songs on Cup of Sand may not have found homes on our studio albums, but that doesn-t mean they are unworthy of your time. Sure, a few didn-t make the grade, but most of these songs were recorded specifically for compilations, one/off 7@s, EPs, and soundtracks. @With Bells On@/a song I wrote the bulk of/was left off 1997-s Indoor Living in an effort by the others to keep me from buying a new motocross bike with the publishing money I-d have received. I cover this in much greater detail in my upcoming memoir, Wrongs I-ve Endured *PenguinLite(. This marks the first time Cup of Sand has been released on vinyl. We-ve even added three extra songs that weren-t on the original album. This was done to give fans something special, but also to help us realize our dream of one day releasing a three/LP set that somehow has eight fewer songs than Sandinista! Yours in haste, Jon Wurster

Superchunk
What A Time To Be Alive