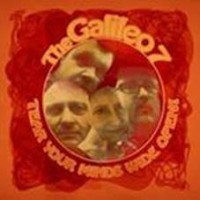 This Kentish quartet have now been kicking out keen psych/pop nuggets since 2010, over the course of four albums and several 45s, but vocalist&guitarist&songwriter Allan Crockford-s illustrious past and parallel present, as bassist with a roll call of the greatest British bands of the past 30] years / The Prisoners, The James Taylor Quartet, The Prime Movers, The Solarflares, Graham Day ^ The Forefathers / seems to have, weirdly, done -em no favours. And in an age when peeps of a certain age are going goo/goo googly/eyed over the XTC back catalogue, rediscovering all manner of 60s psych/pop and garage treats, and lionising such moderne combos as Thee Oh Sees and Tame Impala, that the Galileo 7 haven-t reaped comparable plaudits seems just plain stoopid. This, their fifth album *counting the scorching @Live/o/Graphic@ set(, sounds like the work of a quartet of twenty/somethings / it-s high/energy, psychedelic garage rock-n-roll, replete with catchy, memorable tunes, seriously gnarly guitar, darkly humourous lyrics, four/part harmonies, Viv-s searing organ, Paul-s pin/point bass work and gloriously crash, bang, wallop drums, in a Keith Moon meets Thom Mooney *The Nazz( vein. The latter comes courtesy of longtime Galileo 7 bassist Mole *Embrooks & Higher State & State Records(, whose shift to the drum seat has really kicked everything up a notch / his dynamite sticksmanship and stellar backing vox really bring out the best in the band / from the kinetic opener, @Cold Hearted Stowaway@, to the vinyl album-s elegiac closing track, @Nobody Knows Anything@, they-re firing on all cylinders.

Wylde Oscars
Tales Of Treachery And The Nefarious Deeds Of The

Hipbone Slim & His Crowntoppers
The Toppermost Sounds Of...