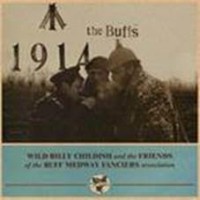 A CLASSIC MEDWAY GARAGE ALBUM AVAILABLE ON VINYL ONCE AGAIN! Billy Childish formed The Buff Medways in 2000. Their full name was Wild Billy Childish ^ The Friends of the Buff Medway Fanciers Association. During the 19th century a breed a chicken was developed peculiar to the Medway area. The breed, now extinct, was a table bird for the London hotel market. The BUFF MEDWAY project, based at Fort Amherst, Chatham, attempted to recreate that ancient fowl through a selective breeding project. The BUFF MEDWAYS cut a dash with their Victorian army uniforms and vintage Vox amps. The gear may be old but as one critic wrote the band were @the snarled lip embodiment of rock-n-roll spirit rather than nostalgia or shabby revivalism@. Live and on record The BUFF MEDWAYS were all about great songs and vibrant raw energy / no frills! The original line up was Billy on guitar and vocal, Johnny Barker *bass( and Wolf Howard *drums(, both ex/Daggermen. Johnny later left the band and was replaced by Graham Day *The Prisoners(. They released two LPs for Graham Coxon-s label Transcopic Records @Steady The Buffs@ ^ @1914@, one on Vinyl Japan called @This Is This@. Their last album @Medway Wheelers@ came out on Damaged Goods in 2005. The Buffs called it a day in 2006, going out on a high with a sold out show at London-s Dirty Water Club on the 27th of October 2006.

Rippers
It's Not A Place For The Men