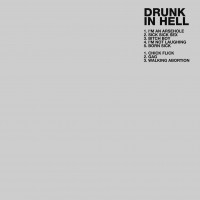 Sonically and socially, this record is an offence and an affront. It is an attack. A mauling. A kick in the egg sac just when you-d recovered from a previous rupture and thought you were safe. Drunk In Hell have been around for yonks but seem to have only just started actually releasing music so people can hear it in the relative comfort of their own homes rather than looking at them on a stage and being a bit afraid. Their record is some 35 minutes long and feels like a power drill is being plunged through the top of your skull, right at that poit where your fontanelle used to be. Feedback whines. A beast roars. Riffs, if one can call them such, grate endlessly and atonally against each other until you-re screeching at your turntable, begging for everything to JUST STOP.