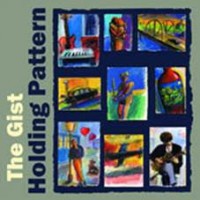 As Young Marble Giants imploded, Stuart Moxham started The Gist, a group more theoretical than real. Members included Vivien Goldman, members of This Heat, Swell Maps, Essential Logic, and various Cardiff pals. One song, Love At First Sight, led to a French hit by Etienne Daho and a shoegaze version by Lush. Three singles and an album, Embrace The Herd, were released and per/formed well. The Gist was an attempt to create another sonic world, influenced by travel, Eno and dub. It was perplexing, and years passed before its originality was revered, via a lengthy Mojo piece, and reissues on Rykodisc, Cherry Red and 1974 Rec/ords. After David Byrne reunited Young Marble Giants to play Meltdown, Stuart re/emerged. An extensive trawl through miles of recording tape resulted in the discovery of hundreds of recordings of an unusually high standard. The first fruit of this archaeology is "Holding Pattern," an unreleased album by The Gist which might have been Stuart's follow/up to Colossal Youth, instead of the strange choice of the more tentative Embrace The Herd. The confidence of these tracks is bolstered by a closer adherence to pop song structure, despite the relentless sense of experimentation found in nearly every track. Had it been released in its time, sever/al of the songs would be regarded as classics today and much of Stuart's history would tell a different tale. There are plenty of surprises,< remarkably, it's fresher and more full of brave ideas than anything new you'll hear.