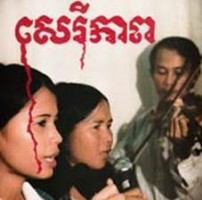 Originally released in 1983 and now available as a reissue, -Cambodian Liberation Songs- is a painful call from forgotten resistance fighters. The Banteay Ampil Band was founded in the Ampil refugee camp near the Thai border. The musicians and female singers, who had hidden their talents during the Khmer Rouge regime, gathered around composer and violinist Oum Dara to engage in a new struggle> the resistance. The album binds together the golden age of Khmer music from the 1960s with the traditional repertoire and the context of the members- daily troubles. The band went to Singapore to record -Cambodian Liberation Songs-, the only record of the Khmer People-s National Liberation Front. This expanded reissue includes liner notes, exclusive photos, a postcard and a download code.