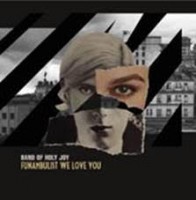 Formed from the ashes of an unrecorded '77 punk band, Speed, Band Of Holy Joy's initial musical forays were largely in the domain of industrial bricolage and occasional bursts of madness. When they re/emerged at the end of the first decade of the new century, it was on their terms. A fiercely devoted fanbase led to regular, albeit low/key releases.. In some aspects, they're an art collective. Inspired by the possibilities which burst forth after punk, the band's expression takes many forms. Visual artist Inga Tillere plays a large role in shaping the band's aesthetic and live events, and in musical foil James Stephen Finn, Johny's poetic vision transcends expectations without resorting to desperate reaches into esoterica. It rarely names any names, and it's far from strident, but it's undeniably a record forged by 2017. *And you don't need to look it up / a funambulist is a tight/rope walker / even we're not sure if that's a metaphor or simply an obtusely snappy title.( Funambulist comes hot on the heels of The Clouds That Break The Sky, a 3CD boxed set of Band Of Holy Joy's pre/Rough Trade records of the early to mid/80s.

Le Be
Le Be