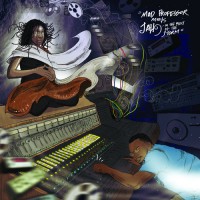 Mad Professor Meets Jah9
In The Midst Of The Storm

Following the 2017 RSD release of a limited coloured LP/Vinyl edition, here's the official full length album release in full glory and traditional black LP/Vinyl!Mad Professor, the Ariwa sound guru and pioneer of the second generation of dub's digital rebirth, has once again given his trademark dub/me/crazy treatment on Mad Professor Meets Jah9 "In the Midst of the Storm". Sonically diverse, "9" already plays as a sophisticated musical entity that places the listener in the thick of Jah9's musical conjuring. What Mad Professor accomplishes with In the Midst of the Storm is an expertly executed, authentically Ariwa dub rendition of an album already heavily influenced by the dub genre. Dense arrangements prevalent on tracks like "In the Midst" are stretched open, letting the listener vibe on the intricacies as they are washed in a wave of digital reverb and delay to become "I Aware Dub". The spirituality placed in the foreground of Jah9's songwriting carries seamlessly into the instrumental dub versions presented on In the Midst of the Storm as the Mad Prof lets the beats and tones preach the gospel of dub. Mad Professor Meets Jah9 - In the Midst of the Storm is the confluence of two spirits, each driven by the divinity of music's ability to connect to the human experience.