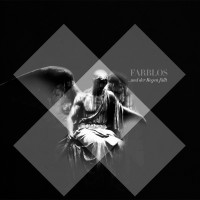 On December 2nd 2012, the one-man project of F. Karnstein known as Farblos published a digital ep containing five home recorded demos through his Bandcamp site. These recordings are the reflection of F. Karnstein's love for the 80's and early 90's new wave / goth scenes. Heavy use of synthesizers and bass guitar are his trade mark. Romantic, melodic, atmospheric tunes to dance and think to. Self-produced, recorded, mixed by this talented, multidisciplinary artist and remastered specifically for vinyl by Nicolás Zúñiga. Compiled for the first time on a physical format and featuring a fantastic bonus exclusive to our release, the previously unheard demo version of 'Never too late' that acted as a basis for the later studio recording.'..und der Regen fällt' is presented in a short vinyl run of 200 copies, pressed at 45rpm for best quality and housed in a heavy matt finish sleeve with insert.The creation of the song 'Winterherz' ('winter heart') over a course of several years had never been intended as more than a pastime activity for F. Karnstein. But as the upload of the track to the internet in January 2010 was met with a lot of positive feedback, Karnstein's creative focus shifted towards the sort of music he is most fond of as a listener, resulting in the official formation of the one-man project that was eventually to be named 'Diurnal Masque' for a few months' time and more definitely, 'Farblos' (the German word for 'colourless').Mr. Karnstein writes music that is a mixture of Dark / Cold Wave, and Synth / Goth Pop, perhaps best described as New Wave Revival, incorporating a wide range of inspirations and influences from Joy Division via Psyche to Einstürzende Neubauten. With his heavy use of synthesizers and bass guitar his music is rather easily identifiable as a product of his love for 80's and early 90's new wave and goth music.Through 2011 and 2012 first media attention arose on web radio stations and press. Three of Karnstein's demo recordings were aired by Mick Mercer at his show, two of them included on digital compilations by 'At Sea Compilations' and a third on one of the 'Gothic' magazine CDs.Finally, on December 2nd. 2012, Farblos published a digital ep containing five home recorded demos through his Bandcamp site. In the summer of 2013 the recording for the yet unnamed debut album (due in 2015) began. 'Never too late' was the first one to be professionally recorded and featured on the digital only 'Stairways - Twist the Past' compilation. And the rain falls...TRACKLISTSide AA1. Never Too Late (5:32)A2. Du Fällst (3:23)A3. Diurnal Masque (4:41)Side BB1. Winterherz (...Und Der Regen Fällt) (4:51)B2. Auf Der Schwelle (4:53)B3. Reisen (5:00)

Farblos
Nothing Left For Us To See