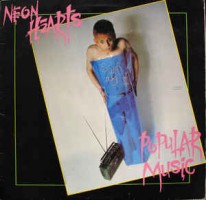 The Neon Hearts were formed in the spring of 1977 by saxophonist Steve Heart who had left Suburban Studs. Other members soon joined> Paul Raven *bass(, Keith Allen *drums(, Martin Ratcliffe *guitar( and Tone Dial *vocals(. The band were highly committed and rehearsed for 3 hours nightly. They soon had plenty of songs and entered Ginger Studios to record the best of them. The result was the now legendary double A/side egulations' and -Venus Eccentric-, released in December 1977 on their own Neon Hearts label. Packaged in an outrageous oversized 8@ cover, a copy will now set you back £60. The band established their own punk venue at the Lord Raglan in Wolverhampton and gigged furiously nationwide, building a substantial following and reaching the attention of many labels. Despite various options, Neon Hearts made the wrong decision and signed to Satril. Immediately things started to go wrong as the label tried to manipulate the band by rewriting their lyrics, allowing them no say in the production of the records and releasing singles without their consent. Satril released two singles nswers' and opular Music'. Line/up changes followed and by the time the album *also titled opular Music'( was released in April 1979, the band, dispirited, had already split. There was a brief reformation before Tony joined Fashion, Paul Raven joined Killing Joke and later Prong and Steve formed 21c *21st Century(. This album closely repros the artwork of the original, but with the addition of a 12" card insert with sleeve notes from Steve Harrington, is packaged in a heavy duty cover and is on red vinyl and limited to just 500 copies.