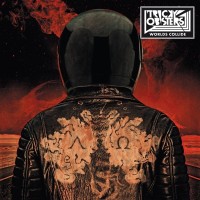 TRICKY LOBSTERS are hailing from the Baltic Sea area and remain one of Germany-s best kept secrets in Underground Rock with tens of thousands of miles of touring under their belt...With deeply rooted in the same scene as ourselves here at Exile On Mainstream it was only a question of when our paths will cross and a collaboration was dealt out. Now it happened. With their newest effort Worlds Collide, due for release in June 2017 we are happy to welcome the Tricky Lobsters raft in our harbour. From Noise to Punk Rock in the early years, from Rock-n-roll to the gnarly Sludge Blues rock on their latest output The Blue Hospital Conspiracy, their body of work includes pretty much everything with a noisy edge. Rostock& Germany based hard rockers TRICKY LOBSTERS continue their travels in a kind of western/driven, grande finale and face off in an epic clash of stories, riffs and drama. While the sky bis set to flames them and their crowd rise to chant hymns of transcendent blues dreams. Engineered and produced by drummer Jörg Peters at Blue Hospital in Rostock in 2017, the three northerners follow diverse paths through rock history and its sounds and bind them together on Worlds Collide, their sixth official release to date / the band is in their 21st year of existence. The alchemy behind their creations is a constant dichotomy, a collision, so to speak, between change and rebirth, taking in all the energy produced by such an approach. With Worlds Collide, they once more present trademark groove and riffs, born from melodies and lyrics deeply rooted in old and recurring stories of love, dreams and deception. The record paints a vivid picture of their current world / and the one behind them

Josiah
Out Of The First Rays

Beyond Mortal Dreams
From Hell