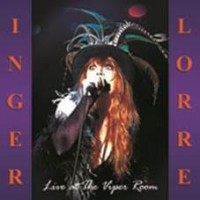 Infamous Nymphs front woman Inger Lorre celebrates how vital her songs still sound today, with a live recording of a sold/out show at the legendary Viper Room. The set includes classic Nymphs tracks, ad ^ Damned', ode to a serial killer he Highway' and the mourning swirl of mitating Angels' and of a cover The Banshees onitor'. This live album is raw and primal< tribal, glamorous, witch/y, grunge/y, punk. Inger states, "These songs are the sound of me walking through fire." Lorre's cult following has grown in strength of late, with the seminal self/titled debut album re issued by Rock Candy Records and 2 new songs released for Record Store Day. Encouraged by the interest she is recording a new album, tentatively planned for an autumn release. Often seen as musician's musician and having worked with the likes of Iggy Pop and Henry Rollins, sadly Inger's notoriety often eclipsed her darkly beautiful music. Haunted by the infamy of a band that burned brightly all too briefly, before imploding in a devastation of bereavement, addiction, mental health issues and misguided record company dealings. @The Nymphs were a very original underground band with a unique sound and GREAT songs@ / Iggy Pop

Grey
Sisters Of The Wyrd