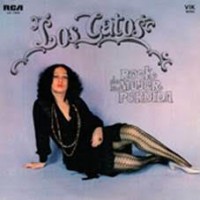 "Rock of the lost woman" is the fifth and last studio album by the Argentine group Los Gatos, released in 1970 by the RCA Vik record label. After a first estrangement from the band, the rest of the group, except Litto Nebbia, traveled to the United States in search of new musical influences in 1969. This brought enough changes in the band, the group will leave aside the beat rock to transform Its sound in something much more bluesy and harder rocknroll. The songs "Rock of the lost woman" and "Woman of coal", among others, prove it. This LP with the passage of the years would be considered the best of Los Gatos and one of the best of Argentine national rock.Originally the album was going to be titled Rock of the rotten woman, but by problems of the censorship had to change it. According to Nebbia himself "the record company seemed very aggressive and I changed the title. At that moment I thought it was fine, that the essence was the same". Litto continues, "On the cover we wanted a woman who responded to the bohemian character referred to in the lyrics of the song ... and we found this girl who was working in a boutique in the East Gallery, on Santa Fe Avenue" . The first photograph that saw Ciro Fogliatta and Bony for the cover was of a bank of images, in which the model, according to the keyboardist"She was three times as fat and dressed in spectacular black lingerie. We could not get the rights, but we set out to maintain that spirit. It-s a very crazy cover, because that story was going around that claimed that the mine of the photo was me, dressed as a woman. A lot of people, if you told them it was me, you threw their morale down. That is very Argentinean".