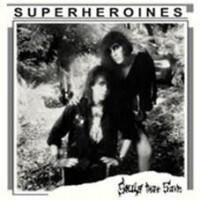 Super Heroines
Souls That Save

LA death rock originators Super Heroines may not be a household name now, but they were on the cutting edge of a variety of different scenes in the early 1980s. Band leader Eva O was simultaneously a member of Christian Death starting with their legendary debut, Only Theatre Of Pain, and worked with husband Rozz Williams in his later group, Shadow Project, until his untimely demise by his own hand in 1998. Meanwhile bassist Jill Emery went on to play with such divergent groups as Hole and Mazzy Star, and drummer Steven Darrow played in pre/Guns N- Roses group Hollywood Rose with Axl Rose and Izzy Stradlin. All of this is to show that the band had a huge mark of the LA scene, not to imply they are just a footnote. Their second album, Souls That Save, came out in 1983 and would be their last record for nearly 10 years. Produced by Kaleidoscope's Chris Darrow, whose son was the drummer, the album picked up right where Cry For Help left off, with more classic 0s LA death rock. Reissued in a numbered limited edition press with printed innersleeve for Record Store Day 2017.

Christian Death
Live At The Whisky A Go Go (rsd)