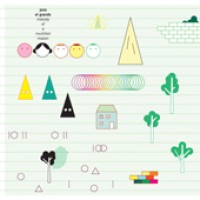 Jono El Grande is a self-taught composer, musician, conductor and prankster and remains an outsider on the far margin of the Norwegian experimental music scene. When Frank Zappa asked "Does Humour Belong In Music?", a certified guess is that many a serious music lover already knew the answer. But like Zappa, Jono understands the importance of timing, and as anyone who has witnessed his concerts can testify to, Jono is a humourist and slapstick entertainer of sublime proportions, his great forte being not letting it get in the way of the music. If Jonos prankster image and celebrity status in Norway - due to being friends with people in and around the royal family - has meant not being taken seriously as a composer, "Neo Dada" should set the record straight once and for all. This is an album brimming with musical adventure, odd turns, weird combinations of sounds and instruments, complex signatures and a good portion of pure joy, all mysteriously sugared with melodic hooks that will stick to your brain like any annoying pop tune. There are elements from the Canterbury and Rock In Opposition scenes and traces of artists such as Frank Zappa, Magma, Henry Cow and Gentle Giant, but Jono has taken large steps since his last record when it comes to establishing his own musical signature. Instrumentations and arrangements are also more adventurous, there are more rock sonics and Jono has successfully picked up the guitar again, an element that has been sorely missing both on stage and on record. Tracks Neo Dada, Ballet Morbido In A Dozen Tiny Movements, Oslo City Suite, Your Mother Eats Like A Platipus, Big Ben Dover, Three Variations On A Mainstream Neurosis, Choko King