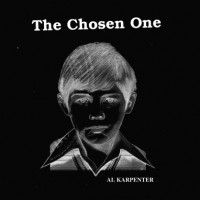 A ghost walks through Bilbao: the ghost of Al Karpenter, the only wild rocker able to restore the hard core of the true rebel music.From the times running his legendary Brutus fanzine to playing the role of Andy Warhol as commissioner of a tribute record in the 40th anniversary of the first Velvet Underground album ("A Gran Bilbao Tribute To The Velvet Underground & Nico"), he arrives now in a trio format with a biographical single where he bares himself. 'The Chosen One' features the distinguished presence of key players of the Basque leftfield music scene such as Mattin (from Billy Bao) and Loty Negarti. Munster is the right label to continue the more obscure and reptil-like path of rock from Bilbao (La Secta, Cancer Moon and more recently Billy Bao). Al Karpenter doesn't disappoint and that city becomes a temporary prism through which New York's no wave travels to London to pick up Alternative TV's strident side, while crossing paths with Scott Walker in a surgery where Iggy Pop mutates into a dog.Apart from barking, the listener will find tense silences, dense textures and intimate reflection by one of the most singular characters to come out of Bilbao.TRACKLISTSide ABEWARETHE CHOSEN ONESide BTHE WANDERER