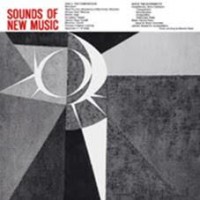 The compositions of this record represent attempts at new means of musical expression. Some utilize conventional musical instruments and sounds in startlingly new ways, giving an impression of an actual "new" sound being created< some use instruments new to music *electrical, mechanical and natural( adding to the composers' palette of timbres and tonalities. *...(This record is meant as a tool for those using new sounds and techniques in composing. There are basic sounds *some of which are hard to come by( and basic sound patterns, together with examples of how these sounds and patterns may be utilized *...("Sounds of New Music is a legendary collection of 18 compositions from the 1920s to the mid/1950s representing attempts at a "new means of musical expression." Composers include Edgard Varèse, Henry Cowell, and John Cage, whose "Dance" is played on a transformed Steinway piano that gives the music an almost primitive quality.