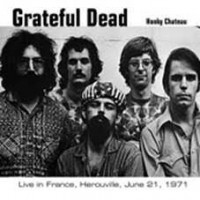 The Château d'Hérouville is an 18th century French château that was purchased in 1962 by the composer Michel Magne and converted into a recording studio. Made famous as The Honky Château by the great Elton John, who recorded 3 albums there, The Château d'Hérouville was the site of an epic and legendary live Dead show from the summer of 1971. As Jerry himself recounts the story, @We went over there to do a big festival, a free festival they were gonna have, but the festival was rained out. It flooded. We stayed at this little chateau which is owned by a film score composer who has a 16/track recording studio built into the chateau, and this is a chateau that Chopin once lived in< really old, just delightful, out in the country near the town of Auvers/sur/Oise, which is where Vincent van Gogh is buried. We were there with nothing to do> France, a 16/track recording studio upstairs, all our gear, ready to play, and nothing to do. So, we decided to play at the chateau itself, out in the back, in the grass, with a swimming pool, just play into the hills. We didn-t even play to hippies, we played to a handful of townspeople in Auvers. We played and the people came - the chief of police, the fire department, just everybody. It was an event and everybody just had a hell of a time - got drunk, fell in the pool. It was great.@ Another epic live radio broadcast in beautiful remastered sound from BRR.Track list> 1. Hard To Handle 2. China Cat Sunflower / I Know You Rider 3. Deal 4. Black Peter 5. Morning Dew 6. Sugar Magnolia 7. Sing Back Home