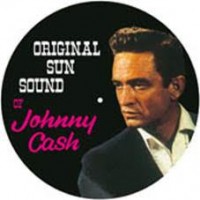 Though Cash had been at Columbia for several years by the time this LP was originally released, he recorded and released such a tremendous amount of music between 1955 and 1958 at Sun Studios in Memphis, that Sun Records was releasing his work long after he had defected to a new label. Featuring 12 fantastic recordings with his Tennessee Two and others, including "The Ballad Of A Teenage Queen", his wonderful take on "Goodnight Irene", and the immortal "Big River". Repressed in a beautiful limited edition picture disc LP on DOXY.