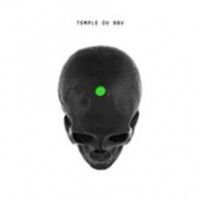 In 1965 the Dutch scientist and psychedelic pioneer Bart Huges embarked on a personal journey by taking an electric dentist's drill and using it to open a hole in his skull, theorising that this measure / known as trepanation and chronicled in this book he Mechanics Of Brain Blood Volume *BBV( / would result in enhanced mental power, and in effect a permanent high for the owner of the skull in question. Fifty/one years on, in 2016, this act formed an inspiration for a meeting of mind and matter on an entirely different level, as Salford's Gnod locked horns for a collaboration with Dutch psyche/delic and experimental force Radar Men From The Moon. Written and recorded in only four days, the result is four uncompromising transmissions, informed equally by stark intensity and hypnotic repetition. Powerful testimony to the expansive and exploratory nature of both bands, emple Of BBV' is a radical foray into the unknown that exists firmly outside of genre or classification.

King Gizzard & The Lizard Wizard
Made In Timeland