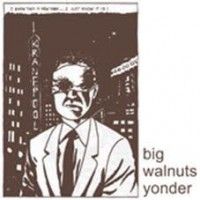 Big Walnuts Yonder is bassist&vocalist Mike Watt *Minutemen, The Stooges(, guitarist Nels Cline *Wilco, Nels Cline Singers(, drummer Greg Saunier *Deerhoof( and guitarist&vocalist Nick Reinhart *Tera Melos(. It is not a supergroup. @It-s worlds colliding,@ says Mike Watt. Four exceptional musicians whose work spans multiple genres and generations, Big Walnuts Yonder is a monumental en/deavour that-s more than the sum of its parts. The results are a truly epic album defying categorization, where one might hear elements of proto/punk, free jazz, power pop, ex/perimental music, psych/rock and your first teenage acid trip all in one. The impetus for Big Walnuts Yonder came about way back in 2008 from a conversation between Watt and Reinhart while their bands toured to/gether in Japan. The two discussed recording together and who they might bring in to the sessions. The album was recorded in just 3 days in summer 2014 in Brooklyn, NY with producer and former Pere Ubu bassist Tony Maimone engineering at his Studio G. @It was this concentrated sort of freakout,@ Saunier says. @We basically had to invent a new band on the spot@01. All Against All 02. Sponge Bath 03. Flare Star Phantom 04. I Got Marty Feldman Eyes 05. Raise the Drawbridges_ 06.