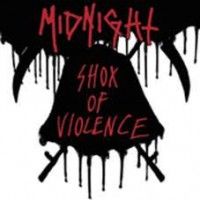 Since 2003, Cleveland-s MIDNIGHT have been slaying the metal&punk underground with their own, highly addictive brand of lust, filth, and sleaze, building up a sizable *and collectible( catalog along the way. And while 2012-s HELLS HEADBANGERS/released Complete and Total Hell collection compiled MIDNIGHT-s massive amount of EPs and splits up to *and successive of( their now/classic debut album, Satanic Royalty, the new kings of Hell needed yet another bursting/at/the/seams compilation that wrangles all their EPs and splits since that momentous debut> enter Shox of Violence. But more than the usual odds -n- sods collection so endemic to heavy metal, Shox of Violence features four brand/new songs to keep MIDNIGHT-s rabid legion of devotees sated while their third album is being prepared. As such, those four songs are being released as a stand/alone 12@ MLP, while the CD and tape versions pack a mammoth 25 tracks total. Across Shox of Violence, in addition to the four new songs, you will find the cover of Venom-s @Too Loud *for the Crowd(@ flexi that was available exclusively to subscribers of Decibel magazine, some super/rowdy live tracks, and a handful of covers of MIDNIGHT favorites The Spits, covers of the likes of Quiet Riot, Girlschool, The Pagans, Australia-s Taipan, and NWOBHM cult Crucifixion among others> all songs that have yet to make it to CD format, essentially. Complete and total hell / again! / complete and total MIDNIGHT, hear these legends/in/the/making at their rawest and most rabid...Shox of Violence!