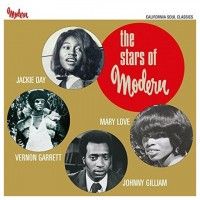 The fifth in our series of "The Stars Of...." EPs is drawn from the catalogue of Modern Records, UK Kent's starting point. Of the earlier editions in the series, only "The Stars Of Mirwood" is still available - these limited editions sell out quickly, so don't delay. Jackie Day's efore It's Too Late' and Vernon Garrett's f I Could Turn Back The Hands Of Time' earned UK releases in the 60s and became early soul scene classics for British fans. Mary Love was known and appreciated back then but her Frank Wilson/penned pounder 've Gotta Get You Back' was an import/only job. It was not until the 80s that Johnny Gilliam's melancholy was appreciated on the big ballad ou Make Me Feel Like Someone'. These four great tracks really work together and the cute 60s/style package makes them a must for Kent collectorstrack listingSIDE ONE1.BEFORE IT'S TOO LATE - Jackie Day2.IF I COULD TURN BACK THE HANDS OF TIME - Vernon Garrett SIDE TWO1.I'VE GOTTA GET YOU BACK - Mary Love2.YOU MAKE ME FEEL LIKE SOMEONE - Johnny Gilliam

Various
Some A Holla Some A Bawl Sounds From Kingston

Mary Love
Lay This Burden Down