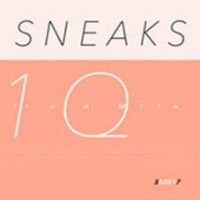 With little more than a bass, drum machine, and deadpan vocals, Sneaks, a.k.a. Eva Moolchan, makes minimalist music that takes up space / something she herself has made a point of doing in the male/heavy Washington, D.C., DIY punk scene that has been her home. Moolchan-s compelling songwriting, along with the fervid energy of her shows, prompted breakout D.C. label Sister Polygon to release her 2015 debut Gymnastics, which Merge reissued in September 2016. It-s a Myth builds on Sneaks- playfully stark approach to post/punk, which, as her hometown City Paper described it, causes listeners to go @from curious to provoked to hungry.@ Hungry, in part, because the new album clocks in at just 18 minutes of 10 taut, captivating tracks *but still a feast compared to Gymnastics- 14 minutes(. It also adds Jonah Takagi and Ex Hex&Helium frontwoman Mary Timony, who recorded the album at Timony-s D.C. studio. @She-s got art in her brain,@ Timony has said of Moolchan. @Her brain is making beautiful stuff.@