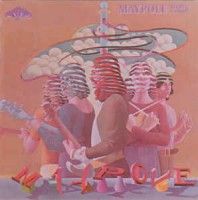 Formed in Baltimore in late 1969, Maypole released their debut LP on Colossus in 1971 and their sound was soon compared to Cream, Iron Butterfly, Led Zeppelin and Jimi Hendrix.Bluesy hard psych vibes, strong melodies and nice group harmonies are the magical ingredients that help making this record an amazing piece of hard rock music. Their label's closure and a relocation to Holland would lead to the band's break-up in 1972, but this outstanding album sounds today as powerful as the day it came out.Presented in facsimile artwork and pressed on 180g vinyl.TRACKLISTSide 11. GLANCE AT THE PAST2. SHOW ME THE WAY3. HENRY STARED4. CHANGES PLACES5. UNDER A WAVE6. LOOK AT MESide 21. JOHNNY2. COME BACK3. YOU WERE4. IN THE BEGINNING5. DOZY WORLD6. STAND ALONE