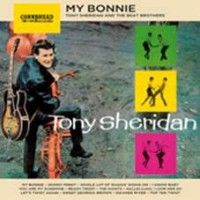 Tony Sheridan may be famous for only one thing at this point in time> performing with The Beatles in their earliest incarnation. But, at the time, in 1961/1962, he was a top beat performer and a charismatic singer in his own right. Featuring several tracks backed by The Beatles, My Bonnie is classic early/60s European beat and early rock and roll. Essential for any Beatles collector and any fan of early/60s Euro/beat. Reissued on 180 gram LP with download card and five bonus tracks.