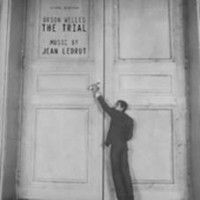 In 1962, Orson Welles brought to the big screen THE TRIAL what he called his greatest film. Filmed in a beautiful black and white, written by Welles and with the incredible performance of Anthony Perkins, Romy Schneider and Jeanne Moreau. "The Trial" captures very well the Kafkaesque feeling of the novel. The film is a paranoic nightmare interrupted here and there by moments of typical Welles humor. One of the elements that contributes greatly to the atmosphere of the film is the soundtrack of Jean Ledrut that makes use of both original parts and adaptations by Tomaso Albinoni *Adagio in G minor(. This soundtrack makes extensive use of adaptations of Albinoni music as well as some original tracks very atmospheric. There are also some jazzy tracks *played by the great jazz pianist as well as composer Martial Solal( that fit beautifully.