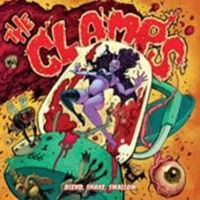 The Clamps are a three/piece speed/stoner rock n' roll band formed in northern Italy around 2012. Made up by former members of local punk, metal and alternative rock bands, the Clamps started to hit the road a few months later for plenty of shows in Italy and Europe, where they shared the stage with bands such as The Sewergrooves, Nashville Pussy, Pontiac, Valient Thorr ,Wild Eyes, Valley of the Sun, Black Tusk, and more. The Clamps squeeze stoner, speedrock, punk and rock n'roll into a a well/recognizable no/frills fat fuzzy sound, and their shows are pure energy! The debut album DEADLY KICK FOR A FAT FUCKER was released in 2013. The second album BLEND, SHAKE, SWALLOW is out in January 2017 for HEAVY PSYCH SOUNDS RECORDS.Eleven speed/rock n roll super tracks, the album is fast, the production is high quality, a perfect soundtrack for a fast and furious car journey on the highway to hell! There-s a pinch of Punk n- Roll too that make the album tracks much more groovy and dirty. Their sound will destroy your face once you push the start button! Fans of Motorhead, Hellacopters and Nashville Pussy will be glad to have this fresh hi energy/fueled album in their hands!

Metastasis
The Essence That Precedes Death

Perpetual Etude
Now Is The Time