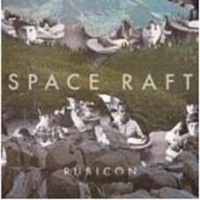 The hallmark of a great band is its ability to progress, to change from record to record. Even a brilliant debut cannot sustain a group throughout their entire career.Thankfully for music fans, Space Raft has that ability in spades. Hints of the best of -60-s and -70-s rock are combined with the dynamism and immediacy of modern post/punk to produce an ever/shifting backdrop of melodic innovation that moves forward several leagues from their self/titled debut.Their new album @Rubicon@ *out April 15 on Dusty Medical Records in the USA and October 15th on Bachelor Records in Europe( takes the positive attributes of their self/titled debut and expands on every aspect of their sound< from pop/rock hooks *opener @Borrowed Time,@ standalone single @Paper Airplanes@( to drifting melodies *@Vacation@( to euphoric instrumental passages *@Disconnection Notice,@ @Red Arrow@(.This can be attributed in part to Space Raft-s consistent membership< after working together for years Jordan Davis *guitar, vocals(, TJay Christenson *keyboards(, Jon Heibler *bass( and Tyler Chicorel *drums( have a second sense about what will and will not combine fluidly< this interplay is crucial to their multi/faceted sound. Also integral to their sound is the one/two punch of recording with Shane Hochstetler at Howl Street Studios in Milwaukee, and the mastering skills of Justin Perkins at Mystery Room Mastering.A video for the song @Paper Airplanes@ is available. Be excited . . . Be very excited.

Midnight Woolf
I'll Be A Dog

Wylde Oscars
Tales Of Treachery And The Nefarious Deeds Of The

Subsonics
A Lot To Forget

Goon Mat And Lord Benardo
Take Off Your Clothes