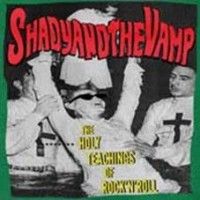 Shady & The Vamp
The Holy Preachings Of Rock N Roll

You unlock this door with the needle of imagination. Beyond it is another dimension, a dimension of sound, a dimension of sight, a dimension of mind. You-re moving into a land of both shadow and substance, of things and ideas. You-ve just crossed over into the rock and roll zone...Three strangers arrive in a small town. Three men in black leather jackets in an empty rented prison. We-ll call them Alpha Junior, Rickety Rocket and Jules the Juvenile, but their names are not important. Their mission, as three men with guitars and drumsticks, lead us into the rock and roll zone.Big daddy, a concerned citizen> "Now you boys don-t happen to be ham radio operators, do you_ What-s so funny_ Big daddy wants to know what-s so funny. Who are you boys anyway_"Shady ^ the Vamp> "We are rockers, Daddy/o. We came from outer space. We-ve been all over the world, we played in Europe, in Scandinavia and even in the United States. And now we-re here to present you our very first full time phonograph record "THE HOLY TEACHINGS OF ROCK-N-ROLL". It-s loud, it-s heavy and it-s a dancer. So you better watch out because the invasion is about to begin."Nerdy music critic> "I don-t see how anyone as weird as you has survived this long."Shady ^ the Vamp> "What-s odd about it_ Don-t you read your newspapers, your magazines_ Listen to your television programs_ Your radio_ We have. It-s loaded with evil corporate crap!"Young lady *puts the record on and starts dancing(> "One minute you sound like a professor and the next minute, you-re talking like a beatnik!"Big daddy *not so concerned anymore(> "Now you look at this cat dance" *Portrait of a simple music friendly community on the eve of rock and roll invasion from outer space. We know it-s merely fiction. And yet, think twice when you drop the needle on your next record. Find out if it-s from the unholy and evil music industry or possibly it came direct to you from the rock and roll zone...(