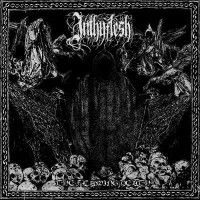 The Portuguese Black Metal scene has been the subject of an ever/growing interest and fascination throughout the years. New bands and labels have been joining the ranks of more experienced ones with a solid relationship of quantity vs. quality. However, very few have been as persevering, consistent and tenacious as Inthyflesh. During an ever/thriving 16 year career, the Portuguese horde has been assembling a vast and ascendant discography, ranging from demos, EPs, full/length records and split releases that showcase a simultaneous devotion to the Black Metal ethos and a continuous excursion into deeper spiritual and unfathomable concepts. Inthyflesh are not initiates to more wider/ranging concepts within a record. Nonetheless, never has the band dedicated itself to the conception of such an ambitious work of art as the one which sparkles from the abyss in 2016. With "The Flaming Death", Inthyflesh presents a monumental double album, one which during 114 minutes unfolds itself on a torturous journey throughout the darkened and tenebrous pathways of the human and spiritual self, set to a wavelength of cold, genuinely atmospheric and evocative Black Metal. In essence, never has the band sounded as piercing, exquisite and intense as in "The Flaming Death". An overall enthralling experience, "The Flaming Death" is divided into 18 hymns that not merely reveals a band in its complete proficiency in artistic and performance terms, but also sonically and mixing/wise. A wall of guitars permeate throughout the whole experience, displaying a multitude of intense and sharp riffs in all its glory. The rhythmic section is extraordinary, with a pulsating bass guitar that meanders along with a powerful and dynamic drum performance. In top of all this, fierce and compelling vocals are the ultimate purge and destructive force that postulates through the yonder end of life. Co/released between Altare ^ BlackSeed Productions.