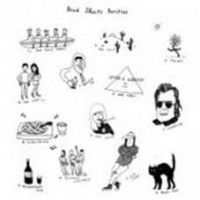 Dead Ghosts originally formed in late 2008 in the basement of Drew and Michael Wilky's parent's house in Vancouver, Canada with friend Bryan Nicol. Influenced by Pebbles comps and girl group records, they began writing and recording, addding bassist Maurizo Chiumento not long after. It didn't take long for blogs and labels around the world to take notice, writing and praising about their songs uploaded to Myspace *yeah, those were the days...(. In less than a year their first single "What To Do" was released on the Milkerpes imprint, the ball got rolling. After another single on Boom Chick we released the split single with Smith Westerns on Bachelor with fantastic artwork by C.M.Ruiz, this one sold out in a wink. More singles followed, leading up to their first full length put out on Florida's Dying in 2011. The S&T LP, a mix of twang balladry soul stompers was a hit with the garage rock community from all over, which sold out and was repressed twice. The collection of songs you can find here are a mix of songs from OOP singles, outtakes, live versions unreleased stuff and covers. They have been up on the bandcamp site for a while, and by popular demand put on black vinyl, limited to 500 copies. Sleeve artwork by Cassie Ramone.