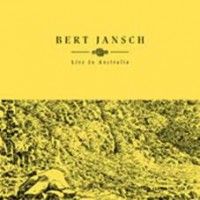 A Bert Jansch gig was a treat however you experienced it, especially when he was at the top of his game, as captured on Downunder> Live In Australia. Eschewing the familiar stalwarts of previous live sets, this memorable recording saw Jansch debut two new *at the time( songs< ownunder' and y Donald', as well as ittle Max' which never had a studio outing. There is a warmth about this recording which echoes that of Live at The 12 Bar, recorded three years before. It's mostly just Bert and his guitar, with the welcome addition of intuitive/ly placed flourishes of bass and percussion. This ambience is heightened by Brian Pyle's sensitive remastering, bringing a real intimacy to this enduring collection of songs. Recorded live at Continental Cafe, Melbourne, Australia in March 1998. Pete Howell *bass(< Ian Clarke *percussion(. Liner notes by Colin Harper. Remastered from original tapes by Brian Pyle.

Jansch, Bert
Live At The 12 Bar