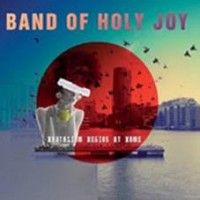 Limited to 500 cop/ies only. Forever changing, consistently unique, yet always somehow the same, The Band Of Holy Joy began life as a collective of gutter chansonniers using junk shop instruments to propagate a brute, romantic and madly literate form of dispossessed urban folk music. Too hard to pin down to a definable style or scene, success eluded them. Success did beckon with a much touted signing to Rough Trade and and a heavy promotional push . . . only to see the label collapse the same week as what would have been their breakthrough album was released. Since then, the band have scaled a few heights, fallen down in a gutter or two, broken up, glued themselves together, toured the world and released a fair few al/bums. These days, the junk shop instruments are long gone and guitars, sixties organ and visuals very much to the fore. But the band continues to write about the same outsider concerns with the same measure of spirit and care, and man, they still put on a show!