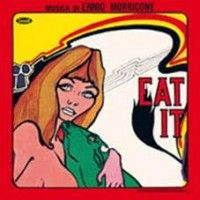 Even if you find the 1969 film @Eat It@, a bit -too weak/willed a film of social satire and advertising, the first and last movie of Francesco Casaretti-, you can not miss out on the soundtrack from the two/time Academy Award winner Ennio Morricone, composed during his most prolific and experimental period.Morricone wrote a score that is, as always, brilliant, conducted by Bruno Nicolai with the choir I Cantori Moderni di Alessandro Alessandroni. The tracks range between danceable *A5, A6, A7 and even a bit @Dies Irae@, B2, a known nursery rhyme almost deformed, interpolated into the main theme(, classical motifs, romantic, and with a touch of bossa nova *A1, A2, A3, A4, B1, B3, B4(, all of which embrace all the psychological and environmental nuances of alienation and paradox that mark the plot of the film. There is also a sense of disturbing and abstract experimentalism that make this soundtrack unique. Particularly in @Quinta Variazione & Africami@ *A6( with the fuzzy Fender by Alessandroni, and @Settima Variazione@ with its three dreamy amazing underwater variants *A7, A8 and B6( and ending with @Eat it@, in the same version as the highly collected 45rpm that came out at the time and is, until now, the only existing track on vinyl from this score< a today legendary cult object and sought for the killer heavy drum by Vincenzo Restuccia and distorted psychedelic Fender Stratocaster of Alessandro Alessandroni. Highly rigid hand/glued Cinedelic cover with a folder insert of 4 facades with photos from the movie.