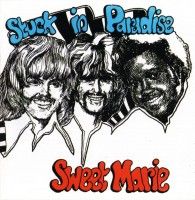 Sweet Marie was formed in late 1969 amidst the turmoil of the Vietnam War and the wild music scene of Hollywood. Prince Teddy, a producer at Capital Records and a songwriter&musician, had a vision for a rock and roll trio with rich harmonies and psychedelic undertones. Sonny Lathrop played guitar and Willy Bims drums. Bims had been the drummer for the songwriters Tommy Boyce and Bobby Hart and played on the recordings of many of their hits from the 1960s and 0s including most of the recordings by The Monkees. Their sophomore album Stuck In Paradise soon shot straight up the charts with the song "Stella's Candy Store" and became the biggest hit for the band, this time internationally. The band couldn't leave their house on Hawaii without being mobbed by crowds wanting pictures and asking for autographs while their songs played constantly on the radio. They were making appearances on TV and writing songs for commercials and played the Crater Festival in Hawaii with Carlos Santana and did shows with other famous groups such as The RascalsFeaturing Augie Colon on congas and bird calls from paradise! He was the man behind those legendary percussions in Martin Denny-s 1956 hit song -Quiet Village-!Limited edition of only 500 copies. Remastered sound, original gatefold artwork plus a colour insert.